So, January was busy, and up-and-down, and February is turning out to be more of the same! We are still enjoying our “Little Man,” but Matt did admit that puppies are much more work than he ever dreamed!! If we keep it up with the nicknames, poor Einstein will never learn his real name! So far he is Little Man, Einstein, Einie, Stinker, Bad Dog, and a few more that aren’t printable! He’s actually a really good dog, quite smart (when he wants to be), and also quite stubborn! He does think that is his own personal squeaky toy that runs! I think she hates him, but then I did catch her giving him a short kitty-bath on his head the other day. Anyway, we’ve decided if things get really bad and we have to give up cable, we will still be well entertained! Here are some recent pictures of "the kids." 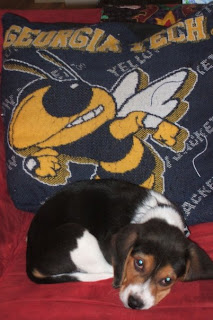 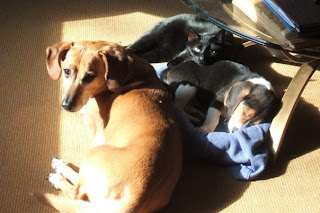 sleeping in the sun together, aren't they precious?? 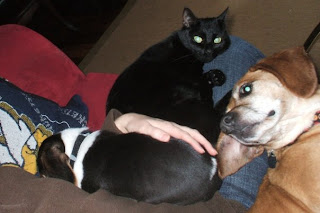 Naptime is a war for laps 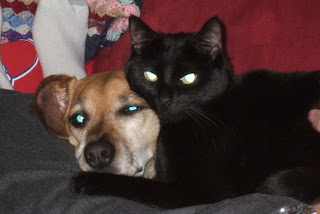 We thought there for a couple of weeks that Matt might have to go to for 6 months with his company to help build a relationship with a new client. Luckily, Matt doesn’t have to go, and he still has a job here (for now)!! YAY! Prayers are needed that continues to get work past the current jobs due in the fall. We are a little worried that after they are done with the current job, his hours will be cut back to 32/week (much of his company is already on this schedule).

As for me, I’ve got an election, budget cuts and the like to survive between now and July 1. I continue to pray for guidance. I’m not sure where the road will lead me, but I’m confident and hopeful.

In other news, I went on Walk to Emmaus last year in April. For those who don’t know, Walk to Emmaus is a spiritual retreat weekend meant to grow and deepen your relationship with Christ. It is named for the story of the disciples traveling on the road between and Emmaus just after Jesus was crucified. Jesus appeared to them on the road and walked with them, but they didn’t know who He was until He revealed Himself to them. Beyond that, I can’t explain it, you just have to GO!

Anyway, our Sunday School teacher and a mentor of mine, Jayne Griffin was my sponsor on the Walk last year. I had an amazing experience and everyone always says you go when you are supposed to. That was true for me and I really believe it’s true for Matt too. When Matt first moved back to he expressed interest in going on Walk to Emmaus. Jay Baumgardner and our friend agreed to cosponsor Matt. They turned in his application and the Emmaus team called him for 2 different walks. Both walks he turned them down because of class work in grad school. They told him to fill out another application when things weren’t so busy. He never did. After I got back from my Walk I asked him if he still wanted to go. He said yes, so now I get to be his sponsor (which is pretty cool)!! I got a call that Matt will be a pilgrim on Men’s Walk #42 in the Chattanooga-Lafayette Emmaus Community at the end of March!!! YAY!

I am working on a TON of sewing and craft projects that I hope to post pictures of when I’m done (and they are given away)!! This will be a busy next few months for my hobbies. I pray you all are as blessed as we and this post finds you well.

Hey Jill!!! Glad to find you in blog world! I'm adding your blog to my list- can't wait to keep up with your life! Glad to see you are doing so well!

Hey Jill! I just saw your sweet comment on my post about my prayer group- thank you so much for your kind words! Our God is an awesome God and His plans are magnificent! We are enjoying ourselves while we wait on His plan- you are too sweet to remember us in your prayers! You will be in mine as well! Alpha Love!!!:)
Adair