I can’t take it anymore; I’ve got to say something. Most of you who know me well know that I am a political wonk, strongly driven by conviction and values. I am a Matthew 25 believing, social justice loving, bleeding heart liberal, blue dog Democrat. AMEN? I love politics. And I really love how engaged so many previously apathetic voters are in this year’s election process, largely due to Barack Obama’s candidacy.

But I must be honest, I feel out of the loop and out of touch. Getting engaged and planning a wedding to take place 6 weeks before Election Day in November has seriously limited my political involvement this season. Now don’t get me wrong, I could not be happier that our wedding day is 16 DAYS AWAY!! But all spring and summer I have felt just a little sad that I haven’t been working at the headquarters or knocking on doors like I’ve done in the past. I mean, Matt and I met during campaign season in 2006 while I was working for John Bailes in the local County Commission race, sigh :(. We held hands for the first time at a Harold Ford Jr. rally, again :(. I so artfully outed Matt as a Democrat to his Republican friends the 2nd day I knew him. Because the 1st day I met him, I asked my 2nd most important screening question, “Who did you vote for in the last Presidential election?” (My most important question is, “Are you a Christian?” which technically I didn’t have to ask because he and I went to the same church) When I met Matt I had officially and decidedly sworn off dating Republicans; it just never worked well for me.

Anyway, I’ve been excited about this election since February (and looking forward to it since, oh November 3, 2004!). I’ve watched as the nation really participated in the primary process and anxiously waited to see which history-making candidate would immerge. I’ve been in Obama’s camp since the day Edwards dropped out (don’t get me started on THAT disappointment). I respect Hillary, but she can’t pull anybody in the South that is sitting the fence. Folks just really can’t stand her, but I digress.

Even though I’ve been a little out of touch, I have been watching the conventions (DVR’d) for the most part. I didn’t see last night’s RNC and Sarah Palin’s speech, but from what I have heard about it, I’m glad I was working on wedding stuff. Through conversations with friends and news articles, I’ve been able to glean that it was harsh to say the least and pushing the lines of total disrespect. I actually heard a Republican pundit on the radio yesterday say, “This election isn’t about policy; it’s about the person. Elections shouldn’t be about policy. They should be about electing the right person to lead.”

Well, YES elections are about electing the right person to lead. I agree with that. But I’m certainly not going to IGNORE WHICH DIRECTION that person is going to lead this country!!!! Are you kidding me?? That’s how we ended up with the last cowboy President. People voted for him because he’s somebody they could kick back and have a beer with; he has a sense of humor, BIG FREAKIN’ DEAL. Look what he’s done!! Whew. Anyway, I find it insulting that they blast Obama for being a “celebrity” and then ask voters to treat this election like a popularity/ beauty contest without considering the policies that will shape this nation for years to come!! Do they think we are stupid? UM YES, they actually count on it. They count on voters being swayed by the politics of fear, false claims to value families (when most families are drowning right now), and bandaids that won’t hold for problems that need REAL SOLUTIONS – POLICY SOLUTIONS. Problems like ending the war in Iraq, energy independence, health care, the price of food and gas, global warming, Social Security, economic outsourcing, failing schools, gender pay inequity, stem cell research that could help us cure the worst diseases of our generation, these are all things that we MUST address instead of sticking our heads in the sand!!! The answer can no longer be ‘pull yourself up by your bootstraps’ and ‘drill baby drill’.

Come on people. Join us. Take Washington back from the oil companies and the top 5% of wealthiest Americans. It’s time our government worked for us again. It’s time that we had someone trying to give us a boost when we need it. It’s time that Washington is focused on the problems that ACTUALLY affect our families, like whether there are enough good paying jobs with health benefits out there for people who can and want to work. A strong and healthy middle class is the key to a strong and healthy America. Let’s stop the middle class disappearance and fight for POLICIES that can turn this country around. 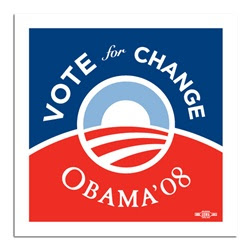