So, onto my confessions. It's been a couple of weeks, so we'll go way back.

I would never stoop so low as to cry and throw a hissy fit on the phone with the company that I ordered sewing supplies from for Caleb's baptism outfit (even though I knew I waited a little too long to order them) just to get them to overnight me another order. The tears and upset voice WERE real, you know, if I had done that. Which I certainly did not do.

I did not procrastinate sewing so much (even though much of it was not my fault, see above) that Caleb's mommy was worried her son would be naked, I missed a couple of kick@$$ bar-b-ques, and I was up until 2am finishing it. NOPE, I did NOT.

I wasn't just thrilled with how cute Caleb looked in his little outfit! 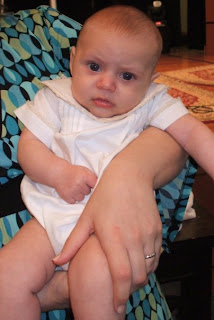 now for the close-up of the duds!! 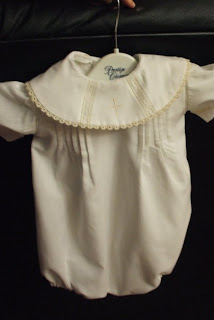 Meredith and I did NOT skip our weekly walk on Wednesday due to storm clouds, and move it on inside to STARBUCKS!! How's that for a workout? We would NEVER do that!

When my friend Debbie called me for help outfitting her precious son Whit for his Elmo on the Farm birthday party, I did not shamelessly promote my friend Ashley's business and Whit did not look absolutely adorable in his custom birthday attire!

I did not throw another teary fit at the doctor's office on Friday because I was 25 minutes late for my appointment. I would not have gotten that upset that have I felt horrible for over a week, they moved my appointment out a day, then sent me to a different office I had never been to with horrible directions causing me to be late, then refused to see me. I would NEVER do that. And if I HAD done that, it certainly wouldn't have worked and I wouldn't have gotten to see the doctor anyway ;)

I did not put off cleaning my house on all those rainy days, because I'm in a bit of a funk (see previous crying fits that did not occur), and cause myself to have to stay in doors most of the day on this beautiful Saturday cleaning because I couldn't take it anymore. And if I HAD done that, I certainly wouldn't have predicted earlier in the week that it would catch up with me and I would miss out on some Vitamin D and a beautiful day. Nope, I would never do that!

I did not act like a big kid at Whit's 2nd birthday party, so much so that Debbie felt the need to send me home with a favor pail full of kids stuff and a coloring book!! :D 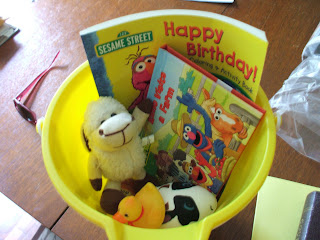 I did not spend most of our 6 mile hike watching our precious puppy Einstein have a ball and regretting that I never took my sweet Blaze on a hike with me just because Hurley can't go (she's got a uniquely formed foot that limits her ability for long walks/hikes) :(

Matt and Einstein enjoying the view at Edwards Point 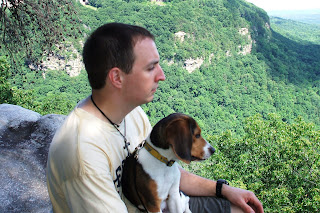 And I certainly didn't shed a few tears while I finally said goodbye to the FIRST Man-of-my-house. I hope he's enjoyed hiking and smelling his little heart out everyday since he left (2/9/07). And I DON'T miss him every single day, I mean of course it gets easier. 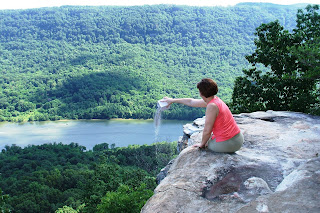 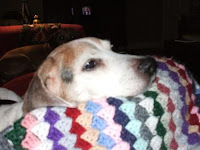 Labels: Not Me Monday

Thanks for my shout out! I'm so glad to hear that Whit looked great in his shirt. I think it is equally great that you got sent home with party favors from a 2 year old's birthday party. :)

hey, I got favors at Knox's bday party!